Cave Story+ is a Cave Story remake for PC, Mac (now defunct), and Nintendo Switch developed by Nicalis. It was released on Steam on November 22, 2011, to the Mac App Store on September 7, 2011 and to the Epic Games Store on December 3, 2020. It features remastered graphics and music as well as several new game modes, one of which being exclusive to the Nintendo Switch version.

Cave Story+ has three music options. Players can choose between the original Organya music, "Cave Story+" chiptune music, or a remastered soundtrack. The game can also be played with the original graphics or remastered graphics with quadruple the resolution (twice as wide and twice as tall). Players may also select to play the game with an English translation or the original Japanese, though the Japanese language selection only extends to the scrolling and inventory text. Status indicators such as the "Level Up!" text and the "Yes/No" option prompts remain written in English. The Switch version has two additional sountracks: "Famitracks" and "Ridiculon".

Within certain dates, the game changes graphics to match the occasion. This adjustment is togglable and can be turned off in the Options menu when the following dates occur to play with the regular graphics.

Cave Story+ has a selection of three difficulty levels. Easy mode halves the HP of enemies and halves the damage they do to Quote. Original difficulty, the standard difficulty, is identical to the original game; Quote takes 100% damage, and enemies have 100% HP. Hard mode doubles the HP of enemies and removes all Life Capsules but one from the game, leaving the player with a maximum of 8 HP. Additionally, the Missile Launcher is not available in Hard mode.

Each difficulty level provides a visual cue during gameplay - in Easy mode, Quote wears a yellow outfit, in Original mode, he wears his standard red outfit, and in Hard mode, he wears a baby blue outfit and has a more human-like appearance.

Seventy-six achievements can be earned in Cave Story+.

The Switch port was first announced via a tweet by Tyrone Rodriguez, the founder and president of Nicalis, in January 2017. In the tweet, Tyrone showed off various upcoming games. Among these, Cave Story was included.[1]

The first formal mention after the tease released by Nicalis was on February 6th, 2017.[2] The update, which came via the Nicalis Twitter, announced that this port of Cave Story would be in a 16:9 aspect ratio. This was the first case of this in any official Cave Story port. The next update would come a week later, on February 13th, 2017, also via the Nicalis Twitter.[3] The update would confirm that the game would receive a physical release. The box art was released would end up being incredibly close to the final box art that the game shipped with. The only difference is that, at the time, it was not officially being referred to as "Cave Story +", it was, instead, referred to as "Cave Story".

On the 7th of April, multiple updates would arrive for the game.[4] On that day, it was confirmed the game's final name would be "Cave Story +", and also showed off the new game logo. The release date would also be confirmed for North America, June 20th, 2017. Also, it was confirmed that the release of GameStop would contain exclusive PVC key chains.[5]

On the 26th of April, it was confirmed that all releases of the game would include a instruction manual.[6] On May 5th, 2 pages were released from the manual.[7] On May 7th, the game's reversible cover art was revealed. The reversible cover art would be a "1990's Japanese Game Magazine ad".[8]

Camp during Christmas, showing Curly, Quote, and a chest 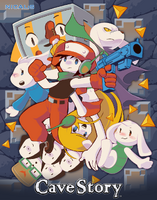 Retrieved from "https://cavestory.fandom.com/wiki/Cave_Story%2B?oldid=20993"
Community content is available under CC-BY-SA unless otherwise noted.