The Egg Corridor? has many stalactites that may fall when passed under. Larger stalactites will stay wedged in the ground and can be destroyed with a weapon. They are also capable of killing enemies underneath them such as Dragon Zombies.

When Quote returns to Mimiga Village, he receives an alert on the computer in Arthur's House from Kazuma, telling him to go to the Egg Corridor. Quote arrives in the Egg Corridor to find the place damaged due to the result of a mass explosion.

Upon reaching the hatching room for Egg No. 00, Quote meets up with Kazuma, who tells him the events that occurred since he left for the Sand Zone. Kazuma managed to escape to the Egg Corridor, where the Sky Dragon in Egg No. 00 successfully hatched. He asks Quote if he wishes to flee the island with him.

When Quote re-enters the Egg Corridor after the explosion, Cthulhu's Abode, which becomes Cthulhu's Abode? becomes necessary to enter to pass through a wall of rubble. Cthulhu and the save disk are no longer present. Two Presses are seen, along with multiple spikes lining the walls and ceiling. A hidden heart will become available by firing on the left wall in the lower chamber.

The player can skip the Sisters by not opening the chest and proceeding through. However, it is also possible to both collect the upgrade and skip the battle if fast enough in reaching the exit.

The room appears in its same state as before the explosion, except the egg is now gone. If the player checks the computer, they will meet Kazuma and be allowed access to the Outer Wall from a door on the far right. 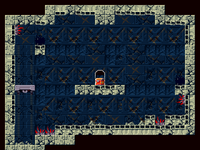 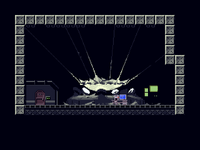 Egg No. 00 after explosion 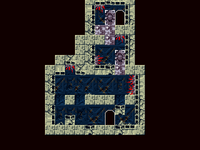 Cthulhu's Abode?
Add a photo to this gallery

Some enemies encountered in the Egg Corridor can be found after the explosion, along with the addition of some new enemies.

These enemies are seen in the Egg Corridor only after the explosion.

Retrieved from "https://cavestory.fandom.com/wiki/Egg_Corridor%3F?oldid=21143"
Community content is available under CC-BY-SA unless otherwise noted.