The Labyrinth (迷宮 Meikyuu) is a giant maze where Jenka sent the Gaudi to protect the Core. It is also said to be the island's trash heap, where Quote is sent to by Misery, along with Balrog and Curly Brace.

After waking up from hitting the ground, Quote traverses through the Labyrinth and eventually encounters Curly Brace in the Camp, who is still recovering from the fight she had with Misery in the Sand Zone. After restoring all his health, Dr. Gero asks Quote to collect the Cure-All, found in the Clinic Ruins. Quote goes to the Clinic Ruins and takes the Cure-All, but has to face Puu Black in the process. When Quote gives Dr. Gero the Cure-All, he talks to Curly, who tells that the only way out of the Labyrinth is through the Boulder Chamber. Curly later disappears, taking off for the Boulder Chamber.

At the Boulder Chamber, Quote meets Curly, and the two of them attempt to move the boulder together. They are soon interrupted by Balrog, who challenges Quote to a fight. Balrog eventually submits and agrees to help Quote and Curly move the boulder, on the condition that no one else knows of their encounter. Quote and Curly proceed through the passage once blocked off by the boulder.

Near the end of the Labyrinth, Quote and Curly come across the Core and defeat it. They have a brief encounter with Misery and the Doctor before the Core is taken away from the chamber. The water level in the Labyrinth rises drastically, causing Quote to be knocked unconsciousness. This causes Curly to give Quote her air tank, saving his life.

The Labyrinth has three teleporters: two of which transport the user within the Labyrinth itself and one that leads to Arthur's House. The teleporter is initially broken, but is later fixed by Professor Booster if Quote crosses the gap to the Core without talking to him. This allows access to the Labyrinth after receiving the Booster v2.0.

The exit of the Labyrinth ultimately connects to the Waterway, which leads Quote down a tall passage and prevents him from being able to go back in the Labyrinth again.

Labyrinth I (迷宮I Meikyuu I) is the part of the Labyrinth Quote arrives first at. It is a vertically large room with a terminal on top of it that opens the way to the Labyrinth H. On the way up, there are purple Critters and moving blocks. At the bottom of it, there are blue robots some of which tell Quote more about what Labyrinth is, and some of which are broken. A Life Capsule is located in this room.

Labyrinth H (迷宮H Meikyuu H) is a small part of the Labyrinth (compared to other Labyrinth parts) which consists of a Gaudi, a broken robot and several moving blocks.

Labyrinth W (迷宮W Meikyuu W) is a horizontally large Labyrinth part. At the very beginning of it are located purple Critters jumping out of holes and the Labyrinth Shop, followed by a part with Gaudis (both normal and flying ones). Afterwards, entrances to the Camp and Clinic Ruins can be seen. Then, after a part with moving blocks, comes the large part of the map which is used for battling with Monster X.

The Labyrinth Shop (迷宮の店 Meikyuu no Mise) is located in Labyrinth W. The shop is run by a Gaudi named Chaba. A few items can be obtained here.

When the player talks to Chaba, he says that his shop had been burgled recently thus he cannot sell anything. He offers to give or trade Quote an item depending on what weapon he has. There is also a teleporter in a high, inaccesible portion of the shop which links to Labyrinth M. It can be reached with the Machine Gun or Booster v0.8, but it only starts working after Quote has gotten to Labyrinth M.

Camp (キャンプ Kyanpu) is a hospital in the Labyrinth where Curly is being healed by Dr. Gero and Nurse Hasumi. It is consisted of a save point, a chest and two beds, one of which is occupied by Curly. The chest cannot be accessed directly through the same entrance as the one used to speak to Curly, Dr. Gero and Nurse Hasumi, but through an alternate one a bit above. The chest itself contains an Arms Barrier.

The Clinic Ruins (診療所跡 Shinryousho Ato) is right above the hospital that Dr. Gero and Nurse Hasumi are. The player can get the Cure-All after receiving the Clinic Key from Dr. Gero. The Cure-All is used to heal Curly Brace. Just after the player obtains the Cure-All, Puu Black appears as a boss and the player is not allowed to leave until it is killed.

In Labyrinth B (迷宮B Meikyuu B), there is a gap that separates Quote from the Boulder Chamber. A red marking seen on the ground near Quote provides an indication on when to jump. Making this jump requires Quote to run a distance for maximum jump length.

If Quote falls down the gap, the player encounters Professor Booster, who they had seen earlier fall down the screen when Quote first entered the area. Aside from restarting, talking to Booster is the only way to get out of the pit and reach the Boulder Chamber, as he will give Quote the Booster v0.8.

The Boulder Chamber (大石の塞ぐ所 Ōishi no Fusagu Tokoro) is a large room between parts B and M. It contains a large boulder, which blocks the door between the two sections of the Labyrinth.

Once Curly is healed, Quote meets her in the boulder chamber, trying to move the rock out of the way. Though Quote helps her, the two of them alone are unable to do it. Just then, Balrog arrives to fight Quote for the final time. Once he's defeated, he begrudgingly helps the two robots toss the boulder out of the way before leaving. After he's left, a chest containing the Super Missile Launcher and a save point will appear.

If the player has not obtained the Missile Launcher, it will not be possible to open the chest. Instead, a message appears saying that a charm has been placed and that it cannot be opened.

Labyrinth M (迷宮M Meikyuu M) is one of two areas that Quote travels with Curly Brace, and is found by passing through the exit once blocked by the giant boulder. Armor Gaudis, Fire Whirrrs, Buyobuyos and Fuzz are found in this part of the Labyrinth. The path ultimately leads to the Core room, where Quote and Curly fight the Core. 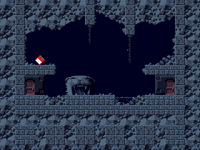 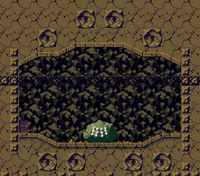 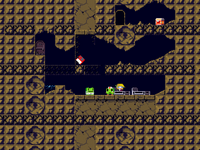 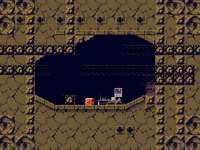 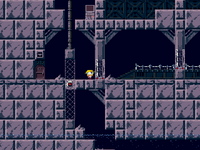 Camp on Christmas in Cave Story+ 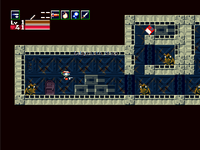 Labyrinth Shop
Add a photo to this gallery

Retrieved from "https://cavestory.fandom.com/wiki/Labyrinth?oldid=20697"
Community content is available under CC-BY-SA unless otherwise noted.