The Outer Wall (外壁 Gaiheki) is a location that connects the Egg Corridor to the Plantation.

Most of the wall is on the left side of the screen, with the open space revealing the night sky and floating clouds on the right. Generally, the enemies here are capable of flying and following Quote when he approaches into their area. Any pickups left behind from killed enemies will float to the edge of the wall and stay there until they are collected or fade away.

A family of three tiny individuals resembling people live in a "Little House" underneath the entrance to the Egg Corridor. Only two of the people will be seen in the house initially; the Little Man can be found wandering around a small area of the Cemetery.

The Little House (リトル家 Ritoru-ka) is located below the door that connects the Egg Corridor to the Outer Wall. To enter it, Quote must walk through the narrow passageway, using the Booster to keep him from falling through gaps in the floor. Once inside, the player has the opportunity to trade the Blade for the Nemesis. If they want to obtain it, they must visit the Little House at least twice: the first time to be able to pick up the Little Man in the graveyard, and the second to bring him back home.

The Clock Room (時計屋 Tokei Ya) is only accessible if the player has rescued Curly Brace. Its presence is noted by an analog clock sign protruding out of the wall. If Quote goes to the left of the sign, he should eventually come across a small gap in the wall with a fence marking. The player can then interact with this hole to go inside.

Inside, the floor is mostly covered with spikes. On an elevated platform stands a chest containing the 290 Counter.

The Storehouse (倉庫 Souko) connects the Outer Wall and Plantation. When Quote first enters the room, he will encounter Itoh as well as a save disk. 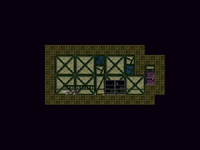 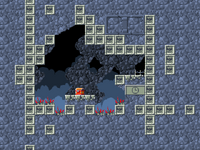 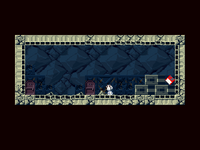 Little House, as seen in Cave Story+
Add a photo to this gallery

Retrieved from "https://cavestory.fandom.com/wiki/Outer_Wall?oldid=21093"
Community content is available under CC-BY-SA unless otherwise noted.