In the Sand Zone, puppies can be collected by pressing the down arrow key when Quote is in front of one. A prompt asks the player if they want to take the puppy with them. Selecting "yes" will put the puppy on Quote's head, and it will travel on top of Quote until he returns it to Jenka. Quote can only carry one puppy at a time, and attempting to pick up another puppy while one is already present in the player's inventory will not bring up the yes/no option to simply switch the puppy he is carrying.

The collection of the puppies for the Switch version goes quite different. In which Quote can carry all 5 at once, and stack them, however, Jenka will only collect 1 at once and keep the same dialogues, telling the player how many dogs are left even they have all with them.

Giving the final puppy will place it between the fireplace and the door. Jenka thanks Quote and says he has done a great favor gathering her puppies, then, she tells quote to come again later in a bit for a reward. This dialogue is also exclusive to the switch version as trying to give the final puppy to her in any other ports will lead to the Balrog cutscene, which only happens here if Quote leave her house, make a few steps, and then, the player hears a quake and coming back, will display the cutscene just as normal.

Nene is found sleeping next to the Sand Zone warehouse. A save point and refill terminal can be accessed here by shooting the corresponding star blocks.

In the Switch version, it was moved next to a Paw Tile, in the end of the first Polishes column. There, hidden hearts and a save point can be found

This puppy make an appearance in the Cave Story+ challenge Sand Pit, in B2, the player needs to be fast to obtain the dog, or else, it will run away and eventually disappear in B3 entry.

A puppy wagging its tail 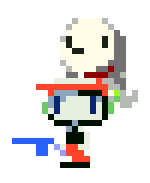 Quote with a puppy on his head

A puppy barks before being collected

Quote carrying all five puppies at once