In the Sand Zone, puppies can be collected by pressing the down arrow key when Quote is in front of one. A prompt asks the player if they want to take the puppy with them. Selecting "yes" will put the puppy on Quote's head, and it will travel on top of Quote until he returns it to Jenka. Quote can only carry one puppy at a time, and attempting to pick up another puppy while one is already present in the player's inventory will not bring up the yes/no option to simply switch the puppy he is carrying (except in the Nintendo Switch version, in which Quote can carry all 5 at once).

Nene is found sleeping next to the Sand Zone storehouse. A save point and refill terminal can be accessed here by shooting the corresponding star blocks.

A puppy wagging its tail 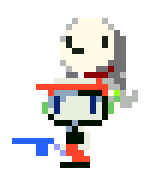 Quote with a puppy on his head

A puppy barks before being collected

Quote carrying all five puppies at once

Retrieved from "https://cavestory.fandom.com/wiki/Puppies?oldid=20997"
Community content is available under CC-BY-SA unless otherwise noted.