The Doctor • Misery • Balrog • Ballos
Quote (クォート kuōto), also known as Mr. Traveler in most NICALiS ports, is the main protagonist of Cave Story and the character the player can control. His name is spoken only once in the normal game, by Curly Brace after feeding her the Ma Pignon mushroom, and can be seen in Statue Chamber after breaking and interacting with leftmost statue. His name is also mentioned by one of Jenka's puppies in the Plantation in Curly Story, along with being fed the mushroom.

Despite his convincingly humanlike appearance, Quote is actually a soldier robot whose mission was to eradicate the hidden dark power of the Island, in contrast with the other robots sent to seize control of it and, in turn, the Island itself and its residents. Due to this fact, he is capable of withstanding huge amounts of damage if he has acquired sufficient Life Capsules, which increase his maximum durability. He is also highly skilled in armed combat and has the ability to wield a wide arsenal of weapons, from swords and guns to anti-material weaponry without any additional training.

Quote wears a red cap with what appear to have bolts attached to it in the front, a black tank top, red trousers, brown shoes, and a long green scarf hanging around his neck. He has white "skin," black hair, dark blue eyes, and large robotic antenna-like "ears" attached to his head. In most official artwork, and in the credits images illustrated by Daisuke Amaya, he wears thick red gloves; however, in the game, these gloves are absent.

In the beta versions of Cave Story, Quote's name was originally Curly Brace. As a reflection of this, his cap in many concept images bears this name. In concept art, Quote wore a blue outfit, a dark green cap, a bright blue scarf, Caucasian skin and red eyes. In a few pictures, Quote's shirt has an image of what appears to be a sleeping cat. His appearance in the gameplay screenshots of the beta remain largely the same to these concept images, with the exception of his skin being changed to stark white, and his eyes being changed to blue.[1]

Quote and Curly Brace are far more advanced than most robots shown in the game, appearing nearly human. While Misery and the Cthulhu quickly recognize him as a "soldier from the surface," Sue and Kazuma refer to him as "boy" or "young man". This obscures Quote's nature as a military android until he meets with Professor Booster. It is also notable that Quote is able to sleep, eat, drown, and (seemingly) make his own decisions. This implies that he may actually be a cyborg or an artificial human, rather than a simple robot.

Ten years prior to the events of Cave Story, an army of robot soldiers was sent to the Island to claim the Demon Crown, a very dangerous artifact which bestows great powers upon the person who wears it. The robots specifically targeted Mimigas in their assault, killing countless masses of them without any notable provocation. During the conflict, Quote and a similar female combat robot named Curly Brace were constructed by an unknown party, and also sent to the island. Unlike the other robots sent there, Quote and Curly were ordered to destroy the Demon Crown rather than claim it for any owner. They arrived later than the other robots; by the time they reached the Island, much of it was in ruins. Death and carnage was everywhere, and most of the Mimiga race had already been exterminated. By the time they found the Demon Crown, a human named Miakid had already claimed it, becoming the third being in history to do so. Quote and Curly fought Miakid, and managed to fatally wound him, but were both seriously damaged. For the next ten years, Quote laid incapacitated, dormant and undisturbed in a small cave, separated from Curly Brace.

At the start of the game, Quote finally awakens with complete amnesia: he has no memory of his purpose on the island, who he is, or where he is, or why he was there. He also possesses no weaponry of any kind. After stealing a weapon from a hermit, he shortly wanders into Mimiga Village, whose inhabitants are being systematically forced into a renewed conflict by the newest owner of the Demon Crown.

Quote is a very quiet robot. He does not speak often in the game apart from giving "Yes/No" answers to questions posed to him, though there are several instances in which he communicates with other characters. Quote's dialog is not shown to the player, instead being shown as ellipses (ex.: "......."); the only exception is when he is asked for the password to access the Hideout in the Plantation, when he repeats the password given to him by Sue. In the WiiWare, Nintendo 3DS eShop, and Nintendo Switch ports, the player has access to "Curly Story," which switches the roles of Quote and Curly Brace. In this mode, Quote speaks only a single line (telling Curly who he is when he's fed Ma Pignon). In addition, the ending credits images and official artwork reveal that he has subdued emotions; he only emotes in two of the credits images, out of seven where his face can be clearly seen, and he almost never emotes in official artwork.

Though his impassive expressions make him very hard to read, his actions throughout the game (such as helping Sue, retrieving Santa's key, freeing Kazuma, and fetching Jenka's puppies) all strongly imply that he honestly cares for the people around him and wishes to help them in any way he can. It is also implied by Misery that he is very tenacious, relentlessly pursuing tasks until he has either completed them or become incapacitated as a result.

Appearances in other media[]

Quote has made several appearances in various media outside of Cave Story.

Quote has made several cameo appearances in various media outside of Cave Story.

Concept art of Quote, with the name "Curly Brace" on his cap 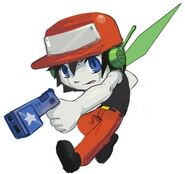 The concept artwork of Quote in Cave Story 3D

Three versions of Quote in Cave Story+ based on difficulty. Original, hard, and easy, respectively

Quote and Curly in Gang Garrison 2. 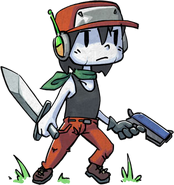 Artwork of Quote from the Japanese Cave Story DSi site 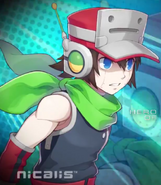 Artwork of Quote from Blade Strangers

Quote's animated portrait from Cave Story+ on the Switch