Curly Brace • Omega • Rabid Toroko
The Sand Zone (砂区 Sunaku) is the third teleporter-only accessible location of Cave Story. Quote is sent to the Sand Zone by Professor Booster, who wants to seek the Red Flowers and destroy them before Doctor obtains them.

Quote teleports to the Sand Zone from Arthur's house, and sees Curly Brace, who retreats to the Sand Zone residence upon seeing him. As he enters her residence, the Colons alert Curly of Quote's arrival, and interpret his presence as hostile based on their past experiences. Curly and the Colons eventually submit to Quote, but find out that he is not the "killer robot" they were expecting him to be. One of the Colons tells Quote that he might be able to find out the location of the Red Flowers by visiting Jenka. The Colon then suggests taking the dog in the small room that's next to the bed.

The fight between Toroko kills her, leaving Quote and King the only two in the storehouse. As King dies, he asks Quote to avenge him, leaving behind his Blade. Quote exits the storehouse and is about to exit the Sand Zone when Balrog captures him, and he and Quote are banished to the Labyrinth by Misery.

The exterior of this building has a red sign above the door. When Quote first enters, he will see the Colons, along with Curly Brace, who he had seen at the start of the area. Walking farther into the residence will cause some dialogue between the Colons and Curly to occur before the boss battle with them begins.

Once the battle is over, Quote can enter the Small Room, which has a save disk, one of the puppies and Curly's Panties, found in a hidden passageway along the outside of the room. The player can only pick up the puppy in the residence after talking to the Colon on the far left.

Jenka's House is located directly above the teleporter that permitted Quote to enter the Sand Zone. A save disk and Jenka are in this building. The player can return each of Jenka's puppies by talking to Jenka. Quote can only carry one puppy at a time, and must bring back each individual one to proceed with the game. Returning the puppies will increase Quote's maximum health by one each (excluding the first and last puppy) in Cave Story 3D.

The walls and floors in this house are mostly invisible, with sand covering some places on the ground. A save disk is encountered here, as well as one of Jenka's puppies, who is seen disappearing into the house as Quote approaches it. There is one area of ground that has a skull and some bones sticking out of it, indicating the presence of a sandcroc. The player can use the Map System if they have it to see the passageways that will help them get to the puppy.

The Warehouse is a building located at the very edge of the Sand Zone. It contains the seeds of the Mimiga-enraging red flowers. Jenka protects the key to it, and Quote will not be granted access until Balrog forcibly opens it. The Warehouse is where Quote fights Rabid Toroko and collects the Blade. 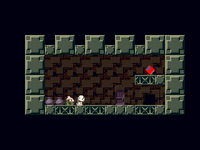 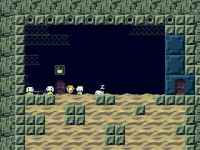 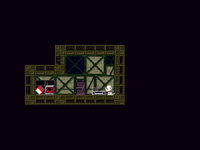 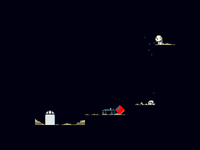 Deserted House
Add a photo to this gallery

Retrieved from "https://cavestory.fandom.com/wiki/Sand_Zone?oldid=20089"
Community content is available under CC-BY-SA unless otherwise noted.